It has been a very very long time since I have posted anything here. I have tons of updates and things to catch you up on but just don't have a whole lot of time to do that all right this second.

I just wanted to drop a quick note to let you know that I still do love you and that I will be back very soon with some really great information that you are going to love. ;)


Thanks for sticking around.
Posted by Manda at 8:12 AM 31 comments:

I missed posting about our trip to the Zoo. It was such a nice day not to cold but nice and sunny. It was a Thursday so the Zoo wasn't packed and we were able to see lots of animals. Corbin had a blast running everywhere. Here are a bunch of pictures .

I know I haven't posted pictures in a while and you guys are probably tired of reading my long drawn out post. So here are few words and some pictures.

Getting Ready to go Trick or Treating 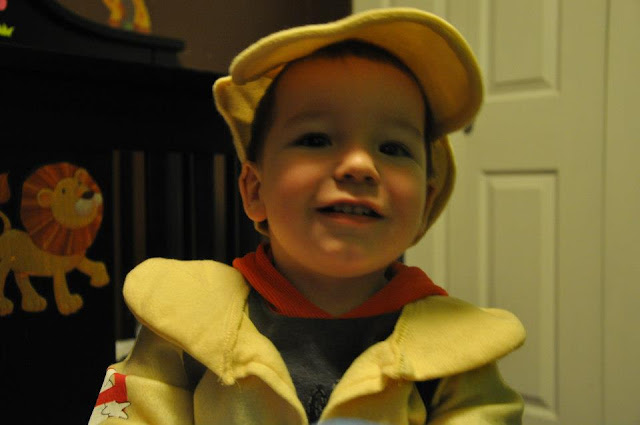 Having fun with his costume 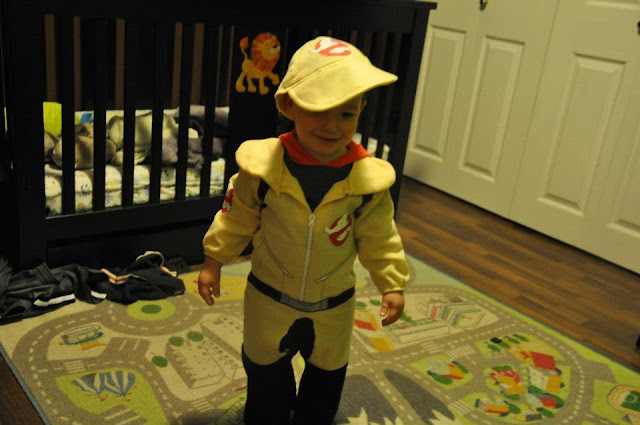 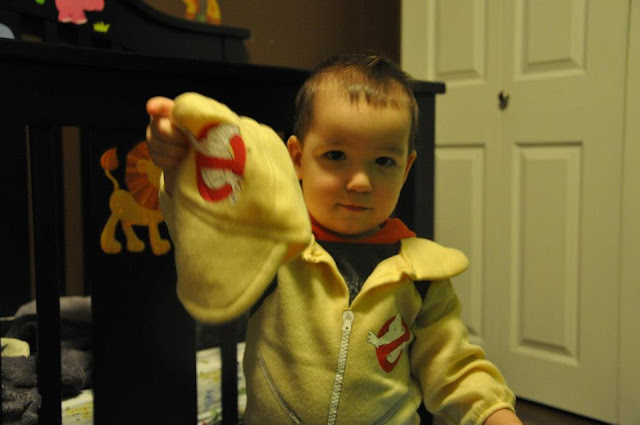 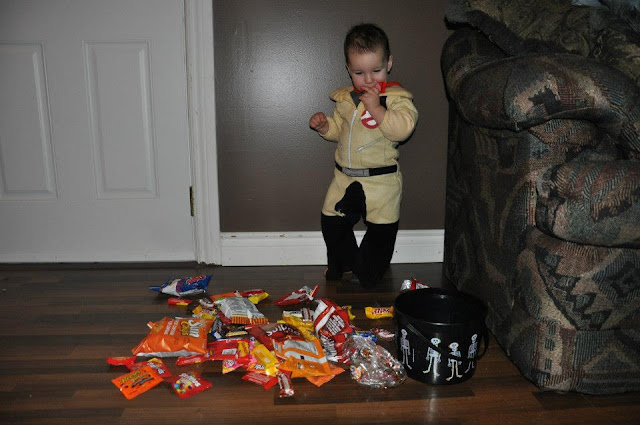 Here is one of my Big Little Man looking so grown up. I still can't believe that he is 17 mths old already, where the heck did the time go. 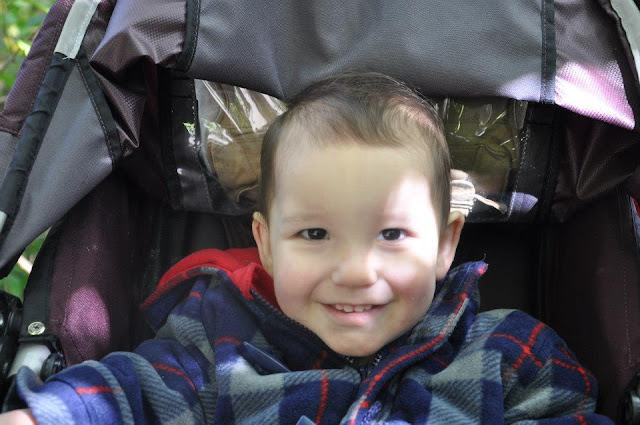 I think the title says it all. Corbin started going to daycare full time about a month ago. After about a week he got a cold. His first cold EVER I should add. It started as a runny nose and sneezing and a cough. The hubs and I both had it as well. After about a week it didn't seem to be getting any better so the little man and I went to the walk in clinic.

So we went along our merry way taking our medication 3 times a day but didn't seem to be getting any better. On day 7 I decided that after work we would go back to the Dr and see if there was something else going on because things were not getting better and actually seemed to be getting worse.

Well fast forward to 4pm that day I get a call from daycare that Corbin woke up from his nap with a fever and the chills and to come get him. By the time we got to the daycare his fever was 102*. We headed straight over the the Emergency room. He was checked in right away as his fever was now up to 104.7*.

I can't even begin to tell you how scary it is to see your baby that sick, to the point that he was just laying on the hospital bed shaking. All the time looking up at me as if to say why aren't you making me feel better.

So they ran a bunch of tests and took a chest x-ray, turns out that our colds had turned into pneumonia. So they gave the little man some Tylenol for the fever and a new prescription for the pneumonia and we were on our way home. We stopped at the walk in clinic on the way home and got some stronger medication for me and the hubby too.

The next day when Corbin got up from his nap he had a bit of a rash starting to show on his chest and his shoulders. So I called the nurses line and they said to stop the medication and to take him back to the Dr in the morning. Well later that night his rash got way way worse and his fever started to go up again. We took him back to the ER. Where they said it was a reaction to the medication so they gave up a new prescription and some tylenol and sent us home saying the rash wouldn't get any worse now that the medication stopped.

Well over night it got way way way worse it was now covering about 90% of his body, his fever was up again and he refused to take the new medication. So back to the hospital we go. This time they tell us to just keep trying to get him to take the medication and if he gets worse or starts vomiting to go to a bigger hospital. (This was at Mission Hospital). I asked if we could give him benadryl or something for the rash they say don't worry about it it will go away on it's own.

So we take him home get him settled for a nap when he gets up his fever was still up even after tylenol and advil. So we manage to get 3/4 of a dose of the medication in him but no food he hasn't been eating much for about a week now. About a half hour later he starts puking this time we make the mad dash 1.5hr to BC Children's hospital. They Dr's there have never seen a rash like his. We managed to get Tylenol and Benadryl into him to get his fever down. Then decide to give him a one shot antibiotic because he now also has a double ear infection and throat infection that is so bad he can barely swallow. Somehow the last 4 Dr's we saw missed this.

Luckily the antibiotic shot they gave him worked and within 72hrs his rash was gone , he was eating and was back to his super happy self. So glad that we have a place like Children's hospital to go when needed.
Posted by Manda at 4:23 PM 2 comments:

Life has been getting in the way of me keeping up with my blog like I was hoping to do.

Things have been good around here. We are getting a lot of little projects done at home painting inside and getting the stairs built on the deck so we can finish staining and build the roofs before winter. I know , I know I said the "W" word but it is coming sooner than we think.

My parents are getting ready to leave and the little man is getting used to daycare he is there today until after lunch and then tomorrow he will be there until after nap time and then Wednesday will be a full day and everyday from then on.

He was such a brave guy today we walked in and hung up his stuff and put his lunch in the fridge and he didn't cry at all. He has his bunny with him so hopefully he will be ok.

We are all just getting over being sick it was a bad cold and I really hope it isn't the start to a bad cold and flu season. I hate being sick at any time but it seems that being sick when it is 25-30* outside is just cruel. Other than to get juice and go to the bathroom none of us got off of the couch this past weekend. We both missed two days of work and are still sick today.

I placed a big Scentsy order from a party and I am hoping it comes in this week so I can pick it up and get it packaged for people soon. Usually Scentsy shipping is really fast but they have been pretty slow for the last two orders I put in . I think I am going to have to start telling people 2 weeks for shipping.

We have been trying to soak up as much of summer as we can while it is here. These days it seems to be going by so much faster than anyone wants it to. The days have been so nice we have been spending as much time at the lake as we can. Corbin is loving going swimming and is quickly gaining zero fear of the water with keeps me on my toes and gives me mini heart attacks several times when we are there.

He hates getting sand or dirt on his hands and will stop moving if they are dirty until you carry him to the water to wash them, he is such a funny little guy.

Everywhere you go these days there is back to school stuff all over the place I have been looking at the list of everything Corbin needs for daycare and putting off getting any of it but I am running out of time he only has about a month left until then :(. It makes me sad to have to leave him there for 12 hours a day but I know he will be learning so much and it is good for him to be with other kids and adults other than family.

I have so many good ideas for his lunches that I am excited for that part of it. I know he is to little to understand that I made him special sandwiches that look like dinosaurs but I will know they are there and I will feel better knowing that he has them come lunch time.

I have a feeling the daycare is going to get sick of me calling to check up on him on a multi-daily basis...lol . I know he will be fine. It's me that needs to get over it...:)

Well I should get back to work my coffee break is almost over I will leave you with a cute picture of Corbin with his cousin playing in the water on the weekend. 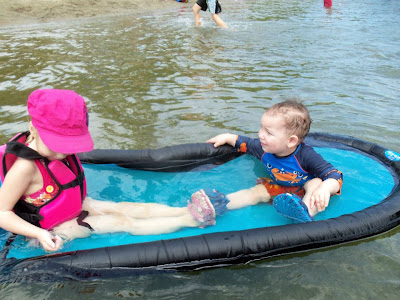 And one showing you just how cute my little man is getting minus all of his mosquito bites. 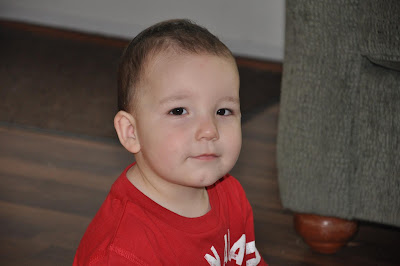 Do you ever notice that when you are a kid time seems to go so slow. It seems like you are always waiting for something, Summer vacation, Christmas, Birthdays ..ect.

Like my blog it seems like there is never enough time to keep it updated I want to be able to keep a record of all the things that happen because like everything else they go by too fast.

We have been getting a lot of work done on our house the last few weeks which is nice. We were going to replace some boards on our deck before we finished staining it but ended up removing a big part and are going to change the layout slightly.

We have also been having some very sunny summer weather all of a sudden and the little man is NOT a fan, he gets grumpy and cranky and doesn't want to eat. I got him a pool for our deck to try and keep him cool but it is a constant battle to keep the mosquitos off of him and me while he is playing.

Went for a great swim in the lake the other night it was about 32*c and the little man was not having a good afternoon so I scooped him up and headed to the lake for a nice swim, the sun was shining and the water wasn't too cool  it was just nice. I'm thinking I might go again tonight if I have the energy for it once I get home .

What are you all doing to stay cool in this summer weather ?
Posted by Manda at 4:11 PM 1 comment: